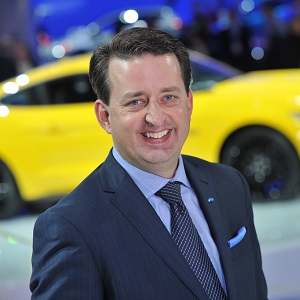 Joel Piaskowski, Global Design Director for Ford Motor Company, oversees the design and DNA development of all new cars and crossovers worldwide. He joined Ford in 2010 as Director, Exterior Design, The Americas where he led the exterior designs of the 2015 F150, Mustang and Edge. In 2013, he was appointed Design Director, Ford Asia Pacific, based in Melbourne, Australia, and in 2014 was promoted to Design Director, Ford of Europe for three years where he translated Ford’s Kinetic Design language into next-generation models such as Fiesta, Focus and the new Puma. Prior to joining Ford, he held design leadership roles at Mercedes-Benz and Hyundai in their respective California design studios. Mr. Piaskowski started his design career in 1990 and spent over 12 years at General Motors. He graduated from College for Creative Studies in Detroit with a Bachelor of Fine Arts degree, specializing in Automotive Design.